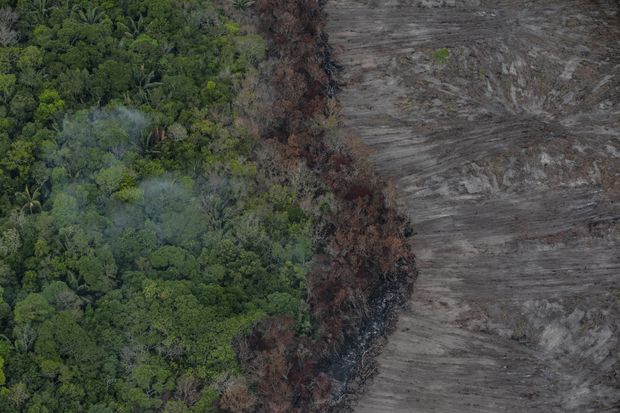 At the fringes of Brazil’s vast farming heartland, technology startup Agrorobótica has built a device the size of an office printer to measure carbon in the soil and help farmers get certified for a budding carbon market.

Government officials, business executives and climate experts say Brazil, an agricultural powerhouse and home to most of the Amazon rainforest, could profit from policies that encourage sustainable farming practices and other methods of draining carbon dioxide from the atmosphere. Such initiatives generate carbon credits that farmers can sell to companies under pressure to cancel out their own emissions.

“The potential in Brazil to capture carbon is way higher than in many other countries,” largely due to the vast biodiversity found in rainforests, said Manuel Piñuela, co-founder and CEO of Cultivo, a California-based firm that connects potential buyers of so-called carbon offsets with climate-friendly projects to fund. He said Cultivo has identified 100,000 hectares of land in Brazil that could be added to its portfolio of projects in the next few months. Brazil’s share of the world’s carbon sequestration potential is 15%, a level matched only by Indonesia’s and well above that of the next highest, 5%, found in the Democratic Republic of Congo, according to a report published in May by McKinsey & Co. and the World Economic Forum.

German chemicals and pharmaceuticals company Bayer AG has set up a program aimed at spurring Brazilian farmers to keep carbon in the soil. Eduardo Bastos, head of sustainability for Latin America at Bayer’s Crop Science unit, said the 414 corn and soybean farmers enrolled in the program take steps such as rotating crops so that carbon-capturing vegetation is always present.

Bayer expects the initiative to help expand its customer base as food producers face more pressure from consumers worried about climate change, while the farmers stand to benefit from Bayer’s technical support, increased productivity and a better environmental image for their customers, Mr. Bastos said.

Figuring out which crops, chemicals and farming methods are best for storing carbon is a key step. Bayer is using Agrorobótica’s device, as well as other methods, to measure the farmers’ progress.

Agrorobótica, a startup with 30 employees and 500 customers in 18 of Brazil’s 27 states, uses a drill installed on a pickup truck to extract dollar-coin-size soil samples from 3 feet underground. The samples are shipped to a lab in São Carlos, a town in the state of São Paulo, where Agrorobótica’s machine uses laser pulses to measure within minutes how much carbon dioxide the soil contains—a method used by NASA to analyze samples of Martian soil.

Agrorobótica is part of a growing number of soil-analysis firms in Brazil and its system is among a handful of carbon-measurement technologies approved by the country’s state agency for agricultural research.

The farmers working with Bayer aren’t yet selling carbon credits, but others are already monetizing their carbon storage. Brazilian coffee producers using methods certified as sustainable are getting paid up to 50% more than market price for their crops under private contracts with foreign roasters seeking to improve their environmental image, for example, according to Vanusia Nogueira, a coffee farmer and head of the Brazil Specialty Coffee Association.

She said it would make sense to shift from the current system of voluntary carbon trading to an organized market.

“If there were a regulated market, a lot more people would join. That would be good for growers and fantastic for the environment,” she said.

Whether a formal market is established depends on global and domestic regulation. Brazilian officials and other observers expect that this year’s United Nations’ climate change conference in Glasgow in November will start to set up standards for a global emissions-trading market, including for measuring carbon extraction and preservation.

Brazil’s environment minister, Joaquim Leite, said legislation introduced in the past few years is paving the way for more credit-generating deals financing sustainable agriculture and forest protection, but said Brazil is unlikely to adopt a carbon market like those of the European Union and California.

In places where formal carbon markets exist, emissions are government regulated and companies that pollute less can sell credits to other firms that overshoot targets.

Mr. Leite, a former businessman with ties to Brazil’s farming lobby, became environment minister on June 23. He talked to The Wall Street Journal before his nomination, when he was an official in the environment ministry. He replaced Ricardo Salles, who resigned after being targeted by police investigating alleged illegal logging in the Amazon.

Brazil is home to roughly 60% of the Amazon, one of the world’s largest stores of carbon. Environmentalists say the climate benefits of better farming could be outweighed if deforestation—which has accelerated since President Jair Bolsonaro took office in 2019—largely driven by food production, continues apace. As of May, 629,760 acres of forest, an area roughly the size of Long Island, N.Y., were lost in the Amazon this year, according to preliminary official data. This represents a 25% increase from a year earlier.

“What has the private sector done to really change its practices?” asked Rodrigo Spuri, a conservation director in Brazil for the nonprofit Nature Conservancy, which says each deforested acre of the Amazon releases 150 tons of carbon dioxide. Brazil’s meatpackers, for instance, are often accused of failing to make sure cattle raised on illegally deforested land doesn’t get into their supply chain.

Walter Schalka, chief executive officer of pulp and paper maker Suzano SA, said carbon markets can play a role in protecting the Amazon by providing incentives for responsible stewardship for forest residents who rely on unsustainable farming and ranching or predatory logging for a living.

“Brazil has a huge opportunity to monetize the reduction of illegal deforestation and the carbon sequestration there,” he said.

Suzano said its operations take about five times as much carbon dioxide from the atmosphere as they release, which resulted in net sequestration of 15 million tons of the greenhouse gas in 2020.

“We believe that carbon is going to be tradable in the near future on a much larger scale,” Mr. Schalka said.

Defying Mr. Leite’s prediction, an early-stage bill in Brazil’s Congress aims to create a domestic market for carbon credits. It was written by Marcelo Ramos, a representative from Amazonas, a state more than twice the size of Texas that is covered by rainforest.

“Brazil has a bad image when it comes to the environment,” said Mr. Ramos, a critic of Mr. Bolsonaro. “We want to show the world that Brazil isn’t hostage to [the administration’s] misguided policies,” he said, referring to budget cuts to environmental agencies, among other initiatives.

Brazilian farmers have for years endured criticism that their vast croplands, pastures and flatulent cows contribute to global warming. Many hope carbon offsets could improve their reputation, while generating an extra buck.

“There’s a lot of expectation among food producers,” said Rodrigo Dias, an agronomist who advises Brazilian farmers on productivity and sustainability. “They want to be part of carbon markets…some because they really want more sustainable crops, and some because of the added income,” he said.